so much data being exchanged, understanding and preparing for potential security risks is critical. In this book chapter excerpt, you'll find an introduction to the functions of the SAP NetWeaver PI suite. In addition, you'll learn about the risks and controls involved in SAP NetWeaver PI's application security.

With SAP NetWeaver PI, SAP provides an enhanced integration platform for processes within distributed business applications. The objective is to integrate both SAP and non-SAP applications via a central platform using flexible web services or via interfaces. Thus, the number of required direct interfaces between individual applications can be reduced considerably. So SAP NetWeaver PI increasingly assumes the role of a powerful SAP middleware that not only enables integration using traditional interfaces but also lays the foundation for service-oriented architectures (SOAs) (see Chapter 7, Web Services, Enterprise Services, and Service-Oriented Architectures) and thus for process integration within and between companies based on an Enterprise Service Bus (ESB).

This excerpt from SAP Security and Risk Management by Mario Linkies and Horst Karin is reprinted here with permission from SAP Press, copyright 2011. Download a PDF of this chapter.

The current release, Release 7.1, contains the Enterprise Services Repository, which serves as a structured directory for enterprise services. Because SAP NetWeaver PI can run on both the ABAP stack and the Java stack of SAP NetWeaver Application Server (AS) (AS ABAP usage type, AS Java usage type, JEE5 for SAP NetWeaver PI), the security of “traditional” PI functions from Release 3.0 (SAP Exchange Infrastructure (XI)) and security characteristics and risks of new functions must be considered.

SAP NetWeaver PI supports three communication variants, two of which are controlled directly by the PI architecture and its components:

To describe the preceding PI components, the following sections provide further information on the logical technical PI architecture. If SAP NetWeaver PI is used, three phases are supported: the design phase, the configuration phase, and the runtime phase (see Figure 12.1). 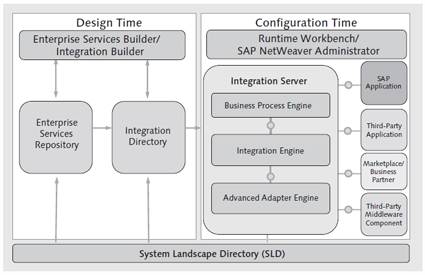 The System Landscape Directory (SLD) stores all metadata that describes the necessary components, adapter versions, and so on. This data is read and updated at runtime, if necessary, by the other PI components, such as the Enterprise Services Repository, Integration Directory, and Integration Server.

From a security validation perspective, the following aspects are therefore particularly essential:

SAP NetWeaver PI runs on the SAP NetWeaver AS and uses it at runtime. The two usage types, ABAP and Java, involve similar risks that can also be mastered with the same controls.

In this section, we use a simplified version of the risk analysis methodology described in Chapter 1, Risk and Control Management, to identify the main security risks and the necessary controls for SAP NetWeaver PI (see Table 12.1). The controls are then discussed in more detail in the following sections and illustrated using examples.

This section describes in more detail the risks and controls that are outlined in Table 12.1 with regard to application security.

SAP NetWeaver PI does not involve direct interaction with the users in the department at runtime. SAP NetWeaver PI is pure middleware or backend infrastructure that transports messages from one SAP or non-SAP system to another target system. Using appropriate mapping rules, messages can be converted and translated so that they’re understood by the receiving system. SAP NetWeaver PI therefore fulfills the function of a central integration hub for all applications connected via connectors.

SAP delivers the following standard roles for administration (design and configuration phase) that can be used in this respect:

Access to the individual object types within the Enterprise Services Repository and Integration Directory can, as mentioned earlier, be designed in a more detailed way. To do this, the following conditions must be met:

In the Integration Directory, the access to the object types Interface Determination, Recipient Determination, Receiver Agreement, Configuration Scenario, and Special Agreement can be restricted. To do this, the authorizations to Create, Change, and Delete are also available. In general, read access is granted using the SAP_XI_DISPLAY_ USER ABAP role.

If new roles are created for the Enterprise Services Builder, the corresponding roles are physically stored in the UME (see Chapter 9, SAP NetWeaver AS). These UME roles for the Integration Repository then start with XIRep_*, or XIDir_* for the Integration Directory. In the UME, they can either be assigned directly to the existing administrator or to a user group.

Note
Please remember: The UME group name is identical to the name of the ABAP role. Therefore, if you assigned a specific role in the AS ABAP to a specific person group, this ABAP role can be addressed as a group in the UME. In the same way, the defined Enterprise Services Builder UME roles can be assigned to the same ABAP users.

The following technical service users are used to access the respective component:

These technical service users are set up during the SAP NetWeaver PI installation and are automatically configured. The passwords need to be chosen during the installation, and it is critical that they are sufficiently complex. The following rules should be applied:

SAP NetWeaver PI can be considered middleware that only administrative employees need to access for configuration or monitoring tasks. Although access is therefore granted to a limited number of people, an authorization concept that assigns appropriate and restrictive authorizations needs to be documented and used.

For the essential SAP NetWeaver PI components, the standard version provides predefined ABAP roles of which — according to Best Practices — copies are adapted to the specific requirements and assigned to the administrative user. The following rules are available for the three components:

It is important that administrators have separate, individual user names and passwords for SAP NetWeaver PI. This is an administrator’s individual responsibility. Password rules should be generally applicable and specify that passwords need to be sufficiently complex:

Get tips for the best way to implement SAP NetWeaver PI