With regard to their declaration, interfaces in ABAP Objects play the same role as classes. Just like classes, interfaces are object types that reside in the namespace of all types. While a class describes all aspects of a class, an interface only describes a partial aspect. As mentioned above, standalone interfaces can be regarded as special abstract classes without implementation that can be used in multiple classes.

The syntax for declaring a local interface is:

Basically, the declaration of an interface corresponds to the declaration part of a class, where instead of CLASS—ENDCLASS, you simply use INTERFACE—ENDINTERFACE. Interfaces can contain exactly the same components as classes. Unlike classes, however, interfaces don't need to be divided into different visibility sections because interface components are always integrated in the public visibility section of classes.

To create a global interface, use the Class Builder just as you would for global classes. In the Object Navigator, select Create · Class Library · Interface. In Transaction SE24, after selecting Create, select the Interface object type instead of Class.

Figure 6.7 shows the Class Builder for a global interface ZIF_DRIVE_ Class Builder OBJECT. You see the familiar user interface that you know from working with classes. When creating components, you need to specify the same input as you do for classes, except for the assignment to a visibility section. In the shown example, we created the same methods ACCELERATE and SHOW_SPEED as in ZCL_VEHICLE presented in Figure 4.7 in Chapter 4. The shown interface can therefore serve as an interface to objects that can be driven. 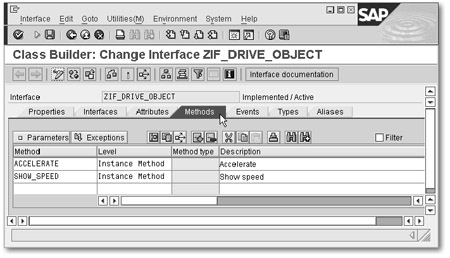 The essential difference between interfaces and classes is that there is no implementation part for an interface. Therefore, it is not necessary to add DEFINITION to INTERFACE. The methods of an interface are all abstract. They are fully declared, including their parameter interface, but not implemented in the interface. Like the subclasses that implement the abstract methods of their abstract superclasses, all classes that want to use an interface must implement its methods. 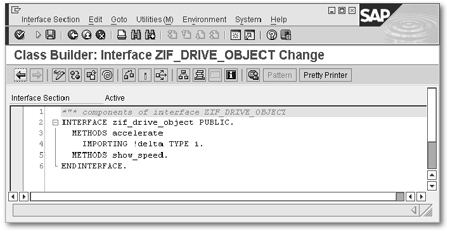