Microsoft and SAP offer products that can manage or process data and information in both unstructured and structured forms. For SAP, this involves SAP NetWeaver Business Intelligence and the SAP NetWeaver Portal (formerly SAP Enterprise Portal), including knowledge management (KM); for Microsoft, this means the SQL Server, Microsoft Exchange Server 2003, and the SharePoint products. 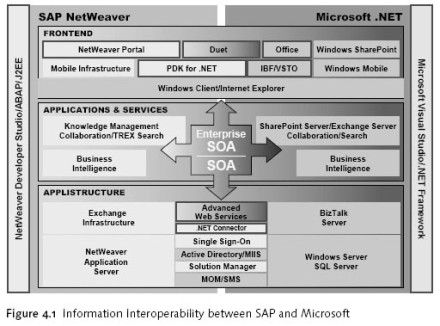 Figure 4.1 shows the many different combinations of interoperability scenarios between Microsoft and SAP products and systems; some will be reviewed in this chapter.

The SAP Business Information Warehouse (BW) is the central component of SAP NetWeaver Business Intelligence (BI). This is SAP's data warehouse solution and its job is to provide company data, the socalled business content, in a processed and structured way. These solutions can include structured data from SAP ERP systems and data from third-party systems.

Figure 4.2 shows the components of SAP BW. It consists of: 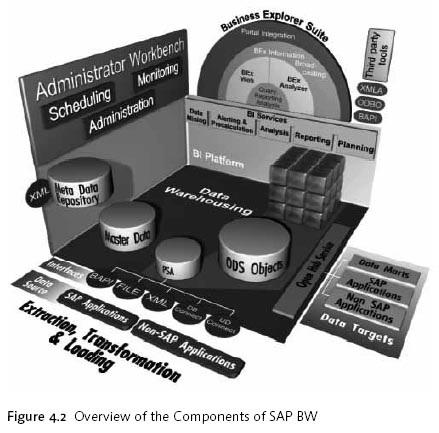 Within the SAP BW Server, the following components play a role in the movement of of structured data:

Two routes must be considered for integration scenarios, in addition to the display of data via the SAP BW frontend, for the Business Explorer (BEx) Suite: the route of the data into SAP BW, and the route of the data out of SAP BW; in other words, accessing SAP BW data from outside. This will be discussed in Sections 4.1.2 and 4.1.3 respectively.

But first, we will a look at an integrated Microsoft/SAP solution that has existed since the introduction of SAP BW: The SAP BW Business Explorer Suite (BEx Suite).

The Business Explorer Suite is the first point of contact for SAP BW users. It offers a range of tools for SAP BW data consumers to define and compile queries, reports, and analyses (see Figure 4.3). 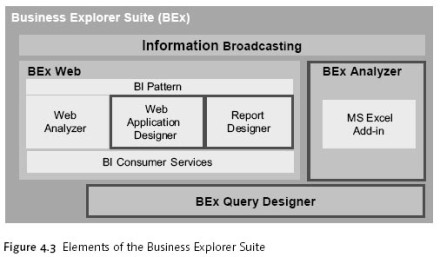 The following BEx components will be discussed in further detail:

While the BEx Analyzer is an add-in for Microsoft Excel, the last three components mentioned are particularly interesting because they are applications that were recently developed for the current version of Visual Basic .NET and are based on the Microsoft .NET Framework.

The BEx Query Designer (see Figure 4.4) is a stand-alone desktop application for defining multidimensional data queries from SAP BW. Here it provides functions for selecting the data basis (InfoCubes), defining the key figures and dimensions of the query and storing the defined query both in an Excel workbook and on the SAP BW system. 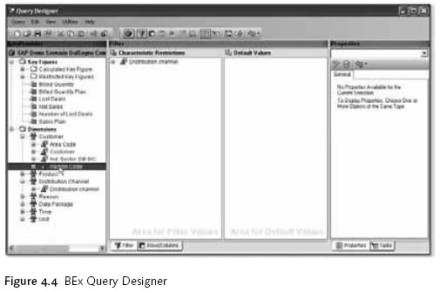 The BEx Report Designer is the BEx Suite tool for creating reports. It draws on the queries that were previously created with the BEx Query Designer (see Figure 4.5).

The reports created with the BEx Report Designer control the drill-down and drill-up functions, which navigate within multidimensional data structures, as well as the slice and dice function. These functions support the possibility of individual views. Here, slice describes the possibility of cutting individual slices from the OLAP Cube, while dice describes a view shift or a "tipping" of this view. 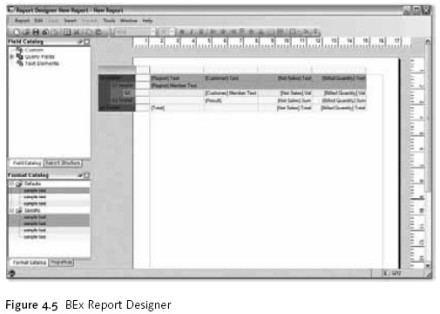 The current version of Bex Analyzer differs from its predecessors in a number of ways.